Saturday - February 4, 2023
On Bangor
Your One Stop Site For Everything Bangor, Maine
Home » Reviews » Movie Reviews » The Feel Bad Movie of The Year

The Feel Bad Movie of The Year 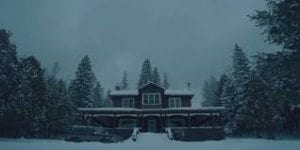 Not long ago on my birthday, I decided to do something for myself. To celebrate my inevitable march toward old age and the grave, a drive in the mountains was just the thing. I fired up the trusty Prius, put my iPhone music on shuffle,* and off I went into the majesty of Colorado’s iconic Front Range.

I stopped at Flagstaff Lookout Point. The road to the top was closed due to snow, and I figured a little stroll would do me good. After a few minutes of picking my way through the recently fallen snow, I became acutely aware of two things. First, as far as I could tell, I was the only one up there. No families frolicking in a winter wonderland. No couples blissfully holding hands as they experienced the beauty of nature. No drunk CU students running down the trail wearing short shorts and flip-flops.

The second thing was the near-total silence. Initially, I was on auto-pilot as I walked. I gradually noticed no birdsong, no critters snuffling in the underbrush. Just the far-away sound of wind mournfully blowing in the trees. At that moment, it occurred to me that if I were killed, nobody would notice for a very long time and that nature would continue on, oblivious to my presence-or lack of it. 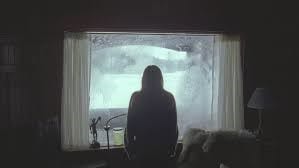 When it comes to freaking people out, atmosphere is key. Standard horror movies rely on startling people, and a character will jump when a cat/monster/serial killer/pan of lasagna bursts out of nowhere. Movies that take the time to create a feeling for the world they inhabit are worth paying attention to. Despite thin characterization and a story that doesn’t quite hold up under scrutiny, The Lodge is a film definitely worth paying attention to.

Our protagonist is not Laura (Alicia Silverstone), as she only appears in the first few minutes of the film. She’s separated from Richard (Richard Armitage), and it seems they’re on good terms. Their son Aiden (Jaeden Martell) and daughter Lia (Lia McHugh) have adjusted fairly well. That will change. Richard informs Laura that he’s ready to move forward with a divorce. He’s been seeing Grace (Riley Keough), and they have decided to get married. With that, Laura commits suicide.

Months pass. Understandably, the children are upset, withdrawn, and they cling to each other as a source of support. As happens in the aftermath of a tragedy, Richard struggles to do his best and he comes up with a plan. He owns a remote lodge nestled in the mountains. The plan is for Richard, Grace, and the kids to spend Christmas together and forge a bond that’s real and lasting.

That will not happen. Aiden and Lia still mourn their mother, and they resent Grace’s intrusion. A little internet research shows them that Grace was the only survivor of a suicide cult and that Richard fell in love with her while writing a book about her experiences. She’s grappling with her own trauma, and when Richard announces he needs to leave the lodge for a few days to take care of work, he asks Grace to take care of the kids while he’s gone. She tells him everything will be fine. It won’t be. 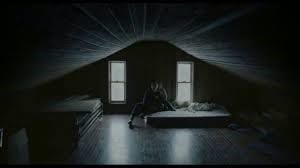 If you’re looking for a fun night out at the picture show with your sweet babboo, I cannot recommend strongly enough not seeing The Lodge.** Do I think it’s a bad film? No, not at all! Directors Veronika Franz and Severin Fiala particularly excel at creating a feeling of hopeless dread. We’re deep within slow burn territory here, and Franz and Fiala use immaculate production design, unsettling cinematography, and a musical score that’s minimal but powerful to communicate a very specific message to the audience. Terrible things are going to happen, and nothing can stop them. The design of the namesake lodge alone is worth the price of admission. It feels slightly too big, slightly oppressive, and when characters make a fire in the fireplace, the light never feels cheery. It feels like a cry in the darkness.

Their script, co-written by Sergio Casci, isn’t constructed with quite the same level of care. Again, let me be clear, it’s not badly written. In fact, they take the time to examine how trauma and religion can ripple through a person’s life, and how sometimes it simply can’t be managed. It’s dark stuff, and solid characterization would have taken the script to another level. Instead, we’re kept at arm’s length from the characters too often. There’s also a plot point that requires some strenuous suspension of disbelief. I think ultimately it doesn’t matter, considering the kind of movie Franz, Fiala, and Casci were looking to make. Their goal is to unsettle and create a growing sense of religious paranoia, and they succeeded.

The cast is solid, and there are two performances that bear mentioning. I liked Riley Keough as the unpredictable Grace. Early on, I had a bit of a hard time sussing out her motivations. Did she genuinely want to connect with the kids? Did she just tolerate them? Were there darker motivations at play? Keough plays her cards very close to the chest, and I liked her struggle between mental illness, familial discord and the creeping isolation of the wintry outdoors. 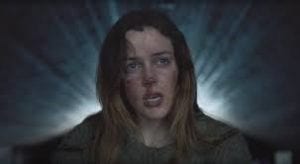 As I said earlier, Alicia Silverstone’s Laura isn’t our protagonist, but her presence looms throughout the lodge and the lives of the characters. Silverstone is a performer who never quite got the respect she was due. She’s equally skilled at comedy and drama, and she’s best known as the bubbly Cher in Clueless. In a way, she’s become a cinematic icon, a likable one, and here she takes that energy she’s known for and curdles it. It’s genuinely shocking to see a performer with that degree of likability go that dark that fast.

I can’t imagine most people will enjoy the experience of watching The Lodge. Only one or two jump scares exist, the only character who is heroic is also utterly ineffectual, and the film is drenched in a profound sense of hopelessness and doom. That’s fine. Franz and Fiala made precisely the movie they wanted to make with skill, and they were backed up by a studio that supported their vision, no matter how bleak and wintry that vision might be.

*There’s something a little weird about driving through the glorious desolation of the Flatirons while “911 Is A Joke” plays.

**Though there was a couple on a date sitting next to me. As the credits rolled, the woman turned to her partner and said, “So the moral of the film is, never introduce your kids to your girlfriend.” She got a massive laugh.

Tim Brennan
Tim has been alarmingly enthusiastic about movies ever since childhood. He grew up in Boulder and, foolishly, left Colorado to study Communications in Washington State. Making matters worse, he moved to Connecticut after meeting his too-good-for-him wife. Drawn by the Rockies and a mild climate, he triumphantly returned and settled down back in Boulder County. He's written numerous screenplays, loves hiking, and embarrassed himself in front of Samuel L. Jackson. True story.
Tagged: Movie ReviewThe Lodge
OnBangor.com is a directory and information guide for Bangor, Maine.
Discover the best of Bangor shopping, restaurants, night life, breweries, events, business, outdoors, fun, local life, real estate, transportation, jobs, and schools.
Looking for what to do in Bangor? OnBangor.com has columnists, and bloggers to keep you up to date on the best of Bangor, Maine.